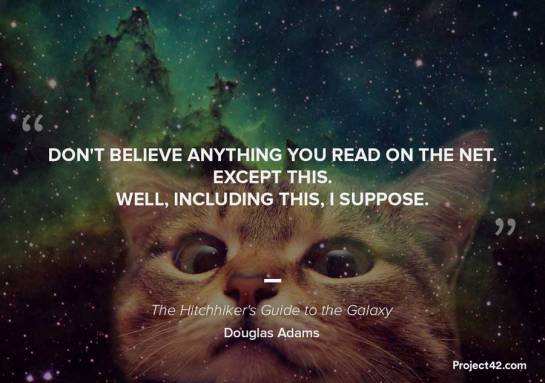 I was at the Head Gardener’s Cottage in Stockwell College, Bromley.  Partaking, with a select group of final year students, of an herb grown in the manicured grounds of that hallowed place.  While listening to a new five-part series on the radio called THE HITCH-HIKERS GUIDE TO THE GALAXY.

Never before had the world heard anything quite like it (RED DWARF came much later).

Now, nearly 40 years later, I am re-reading the book (which was published the following year), and have been struck by the pure genius of its creator, DOUGLAS ADAMS.  Who was no less than a genius.

Not only for the way he could stand apart from all the crap we are all fed with by the mediums of the media, and construct our own small worlds with it, but he could foresee the internet and mobile phones before most people could even imagine them.

Here are some choice quotes (my additions in brackets) from it:

“This planet has – or rather had – a problem, which was this: most of the people living on it were unhappy for pretty much of the time.  Many solutions were suggested for this problem, but most of these were largely concerned with the movements of small green pieces of paper, which is odd because on the whole it wasn’t the small green pieces of paper that were unhappy.

And so the problem remained; lots of the people were mean, and most of them were miserable, even the ones with digital watches (mobile phones).”

“… he also had a device which looked rather like a largish electronic calculator.  This had about a hundred tiny flat press buttons (Apps) and a screen about four inches square on which any one of a million “pages” could be summoned at a moment’s notice.  It looked insanely complicated, and this was one of the reasons why the snug plastic cover it fitted into had the words DON’T PANIC printed on it in large friendly letters”.

“The President in particular is very much a figurehead – he wields no real power whatsoever.  He is apparently chosen by the government, but the qualities he is required to display are not those of leadership but those of finely judged outrage.  For this reason the President is always a controversial choice.  His job is not to wield power but to draw attention away from it.  On those criteria Zaphod Beeblebrox is one of the most successful Presidents of the Galaxy has ever had – he has already spent two of his ten Presidential years in prison for fraud.  Very very few people realise that the President and the Government have virtually no power at all, and of those few people only six know whence ultimate political power is wielded.  Most of the others secretly believe that the ultimate decision-making process is handled by a computer.  They couldn’t be more wrong.”

“One of the things Ford Prefect had always found hardest to understand about humans was their habit of continually stating and repeating the very obvious, as in IT’S A NICE DAY, or YOU’RE VERY TALL, or OH DEAR YOU SEEM TO HAVE FALLEN DOWN A THIRTY-FOOT WELL, ARE YOU ALRIGHT?  At first Ford had formed a theory to account for this strange behaviour.  If human beings don’t keep exercising their lips, he thought, their mouths probably seize up.  After a few months he abandoned this theory in favour of a new one.  If they don’t keep on exercising their lips, he thought, their brains start working.  After a while he abandoned this one as well as being obstructively cynical and decided he quite liked human beings after all, but he always remained desperately worried about the terrible number of things they didn’t know about.”

“There are of course many problems connected with life, of which some of the most popular are WHY ARE PEOPLE BORN?  WHY DO THEY DIE?  WHY DO THEY WANT TO SPEND SO MUCH OF THE INTERVENING TIME WEARING DIGITAL WATCHES (using mobile phones)?”